We have William Bradford to thank for taking pen in hand and keeping records of the early years. He wrote down the names of the passengers and did a separate accounting of the increasings and decreasings of these passengers thirty years later. Unfortunately, one piece of information he did not record in his history was the name of the ship Mayflower. It is known only from a 1623 land division in which settlers were listed under the name of the ship in which they came, viz: “The Falles of their grounds which came first over in the May-floure”. This land division can be found in Records of the Colony of New Plymouth in New England (PCR, 12:306). 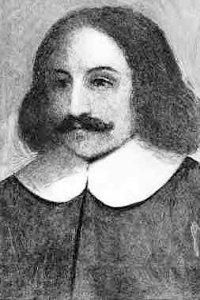 via Wikipedia – A conjectural image of Bradford, produced as a postcard in 1904 by A.S. Burbank of Plymouth. https://bit.ly/2nmnmpt

The names of those which came over first, in the year 1620, and were by the blessing of God the first beginners and in a sort the foundation of all the Plantations and Colonies in New England; and their families.

Mr. William Brewster*. Mary, his wife*, with 2 sons, whose names were Love* and Wrasling. * and a boy was put to him called Richard More; and another of his brothers.+ the rest of his children were left behind & came over afterwards.

William Bradford*, and Dorathy his wife*+, having but one child, a sone left behind, who came afterward.

Mr. Samuell fuller*; and a servant, called Wiliam Butten. + His wife was behind & a child, which came afterwards.

Mr. Christpher Martin+, and his wife+; and 2 servants, Salamon prower,+ and John Langemore.+

Mr. William Mullines,+ and his wife+; and 2 children Joseph,+ & priscila; and a servant Robart Carter.+

Mr. Steven Hopkins, & Elizabeth his wife; and 2 children, called Giles, and Constanta a doughter, both by a former wife. And 2 more by this wife, called Damaris, & Oceanus, the last was borne at sea. And 2 servants, called Edward Doty, and Edward Litster.

Mr. Richard Warren, but his wife and children were lefte behind and came afterwards.

John Billinton, and Elen his wife: and 2 sones John, & Francis.

Edward Tillie, *+ and Ann his wife*+: and 2 childeren that were their cossens; Henery Samson, * and Humillity Coper.*

John Tillie, + and his wife+; and Elizabeth their doughter.

Francis Cooke, * and his sone John*; But his wife & other children came afterwards.

Thomas Rogers, *+ and Joseph his sone,* his other children came afterwards.

John Rigdale+; and Alice his wife. +

Learn more about the Mayflower and tracing your Mayflower ancestors in our course “Research: Mayflower Ancestors”. 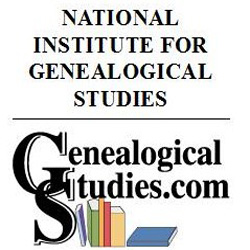